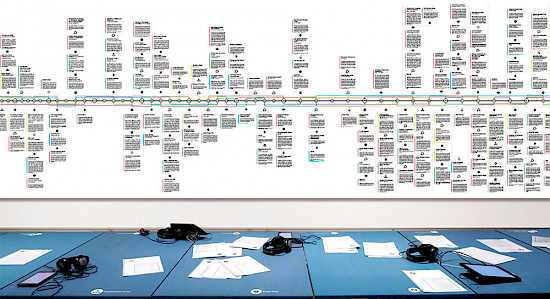 In his talk Armin Medosch is drawing the connection from the neo-avant-gardes of the 1960s to the contemporary discourses and practices on art, art and technology, and art and science: Drawing on research from his recent book New Tendencies and the collective artwork Tracing Information Society, the relationship between art and the technopolitics of the era gets critically highlighted.

Armin Medosch is an artist, curator and scholar with a special focus on art and technology, art and science practices, which he has interrogated since the mid 1980s. His long essay “Shockwaves” has been included in Companion to Digital Art (2016), edited by Christiane Paul. His doctoral thesis, based on a case study of the international movement New Tendencies has been rewritten and expanded into book form: New Tendencies – Art at the Threshold of the Information Revolution (1961-1978), which has come out in June 2016, at MIT Press. The group project Technopolitics develops a Timeline of Information Society which has been shown at Social Glitch, Kunstraum NOE, 2015, and at MAK Österreichisches Museum für Angewandte Kunst / Gegenwartskunst in June 2016; a new iteration of the work will be presented at Transmediale 2017.