In this presentation, Charles Heller will introduce the term “Border Forensics” in two different ways. First, he will use it to describe the particular critical forensic practice pioneered by the Forensic Architecture (FA) project, which has pushed the core components of classical forensic science – violations, traces, and forums of accountability – into profoundly new directions, pushing against the boundaries of the discipline itself. In the process, FA has contributed to re-orient this “science of traces” from one that is at the service of states towards a counter-hegemonic practice. Second, he will deploy this critical forensic lens to analyse the violence of borders themselves – the way borders lead to the harm of migrants. He will focus in particular on the EU’s maritime frontiers, which have been the focus of the Forensic Oceanography project, and show that to contest the violence of borders one must also challenged the boundaries of what can be seen and heard.

Charles Heller is a researcher and filmmaker whose work has a long-standing focus on the politics of migration. In 2015, he completed a Ph.D. in Research Architecture at Goldsmiths, University of London. He is currently Research Associate at the Centre on Conflict, Development and Peacebuilding (CCDP), Graduate Institute, Geneva. Together with Lorenzo Pezzani, in 2011 Heller co-founded Forensic Oceanography, a collaborative project based at Goldsmiths that has developed innovative methodologies to document the conditions that lead to migrants’ deaths at sea. Heller and Pezzani have also launched the WatchTheMed platform, a tool enabling nongovernmental actors to exercise a critical right to look at the EU’s maritime frontier. They have authored a number of human rights reports, including "Report on the Left-to-Die Boat" (2012); “Death by Rescue” (2016) ;“Blaming the Rescuers” (2017); "Mare Clausum" (2018) and “The Nivin” (2019), which have contributed to strategic litigation and have had a major impact both within the fields of migration and border studies, nongovernmental politics and the public sphere. Based on their research, they have lectured internationally and generated a number of theoretically innovative articles on the transformations of the Euro-Mediterranean border regime, the politics of aesthetic practice and nongovernmental politics at sea, which have been published in several edited volumes and in number of international journals such as Cultural Studies Postcolonial Studies , the Revue Européenne des Migrations Internationales, ACME, Spheres, Global Media and Communication, Philosophy of Photography,New Geographies and the Harvard Design Magazine. Their videos "Liquid Traces" (2014), “Death by Rescue” (2016), "The Crime of Rescue" and “Mare Clausum” (2018) have been exhibited internationally, including at the HKW, the Venice Biennale, the MACBA, the MOMA, the ICA and Manifesta 12. 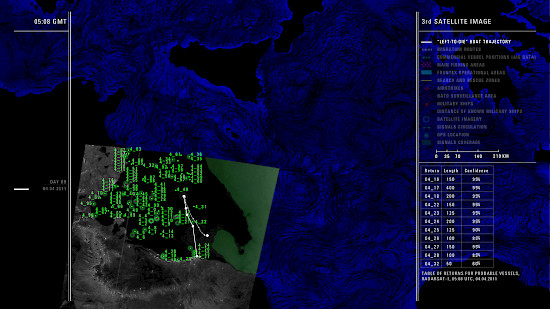