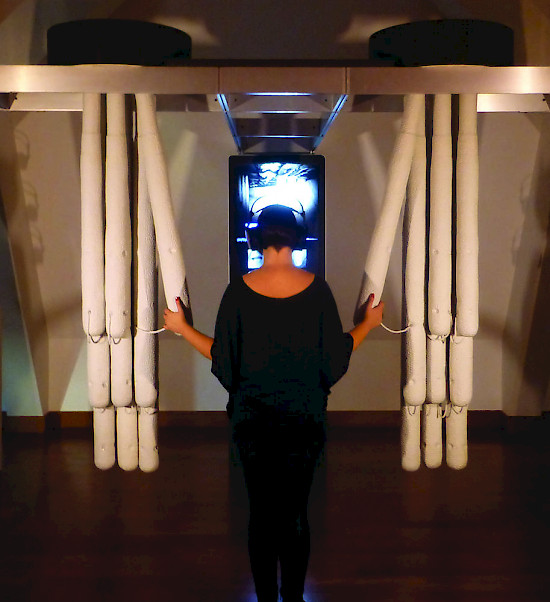 Sensory perception lies at the heart of both disciplines: art and neuroscience. Today brain plasticity and cross model interaction are current potentials and resources shared by both disciplines. Neuromedia (2002-2016) focuses on the scaling up of models from the Scanning Electron Microscope and the production of interactive film segments based on actual scientific research and imbedded with cultural metaphors. Each project in the series constitutes an alternative tactile way to communicate neuroscience, one that allows visitors to learn about proprioception, neural development, visual, sound and tactile perception and the relations between immersion, skin and its environment. Each work is a mediated sculpture installation that invites the viewers to use their own tactile sensory perception in “real time” and at the same time, engage with cultural metaphors and representations. This series was inspired by residencies in labs where scientists explore sensory behaviour at the molecular, cellular and systems level. Scott believes that by mediating perception, digital artists, designers and their audiences can understand more about embodiment and the nature of communication and comprehension.

Dr. Jill Scott is lecturer, professor and context provider with many years experience the unique field of Art and Science research. Currently, she co-directs the LASER Salon in Zurich for Leonardo Society USA. She is professor emerita at the Institute for Cultural Studies in the Arts, at the Zurich University of the Arts (ZhdK) in Zürich and founded their Artists-in-Labs Program in 2000. She was the Vice Director of the Z-Node program- Planetary Collegium with 16 PhD graduates in clusters of art and science at the University of Plymouth, UK (2000 to 2016). Her own artwork spans 38 years of production about the human body, behaviour and body politics, but in the last 10 years she has focused on creative media art experiments about neuroscience, ecology and sensory perception resulting in a series called Neuromedia. Her most recent publications include: Artists-in-labs: Recomposing Art and Science (eds:Hediger, Scott 2016) and Transdiscourse 2 Turbulence and Reconstruction (ed:Scott 2015) both with de Gruyter press. Other publications include: Neuromedia: Art and Science Research (eds: Stöckli, Scott 2012), The Transdiscourse book series: Volume 1: Mediated Environments, (eds:Gleiniger, Hillbeck, Scott 2011), Artists-in-labs: Networking in the Margins, (ed:Scott 2011) and Artists-in-labs: Processes of Inquiry (ed:Scott 2006). All with Springer Press. She has served on many boards and juries including Sitemapping (BAK Switzerland) ISEA international and the Australian Research Council and received international grants and prices for her media artworks.