Experiencing the Alterity of Robots 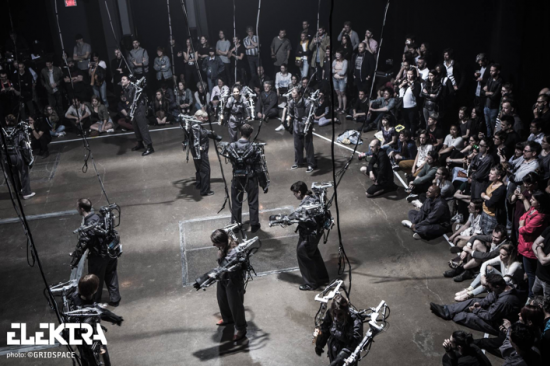 Louis-Philippe Demers talks about his artistic work, reports on experiences with staging interactions between human and machines, and addresses embodied experiences and co-presence of the robotic agent. "We share and identify to biological, social and cultural experiences with performers on the stage. Phenomenologists and theatre theorists claim that these experiences are vastly grounded in the experiential body. What happens when we inject artificial constructions not only on the stage but also in tacitly human social scenarios?"

Louis-Philippe Demers makes large-scale installations and performances. He participated in more than seventy artistic and stage productions and has built more than 375 machines. Demers' works have been featured at major venues such as Theatre de la Ville, Lille 2004, Expo 1992 and 2000, Sonambiente, ISEA, Siggraph and Sonar. He received six mentions and one distinction at Ars Electronica, the first prize of Vida 2.0, mentions at Vida 12.0 and 15.0, two jury recommendations at the Japan Media Arts Festival, the Interactive prize for Lightforms 98 and six prizes for Devolution including two Helpmann Awards.
Demers holds a Ph.D. on robotic performances. He was Professor at the Hochschule für Gestaltung Karlsruhe, affiliated to the Zentrum für Kunst und Medientechnologie (ZKM, Germany). Demers was the Director of the Creative Lab and Professor of Creative Innovation at the School of Creative Practice, Queensland University of Technology. Demers holds visiting/guest professorships from the University of the Ars London and in the past, at the Central Academy of Fine Arts in Beijing and at the Universität für angewandte Kunst Wien. Demers was also principal investigator the Nanyang Technological University (NTU) Interaction and Entertainment Research Centre. He is currently Associate Professor at NTU’s School of Art, Design and Media.