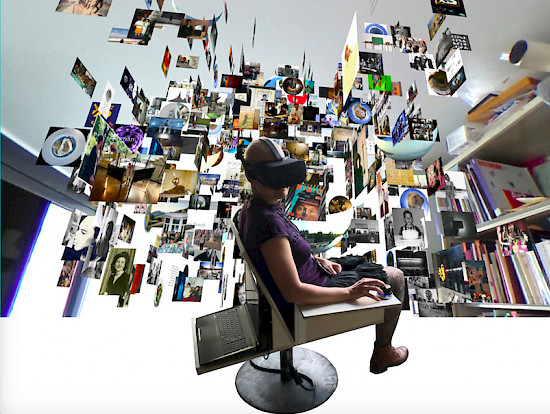 "More that ever, these two fundamental questions are central: Where Am I? Who am I? My current projects, Ephemeral Ontologies, Apparitions, TPort, and Wien Chiaroscuro explore these questions by forming online socialisation experiences opening a conversation on the future of society as our exchanges are increasingly mediated by information technologies, the internet of things, robotics, big data and deep machine learning algorithms … The talk will present these projects, the processes they engage, and the experience they ambition to offer." (Luc Courchesne)

Luc Courchesne is a pioneer in media art and design. From interactive portraiture to immersive experience systems, he has developed innovative approaches which have earned him prestigious awards such as the Prix Paul-Émile Borduas (2019), Quebec’s highest award in visual arts, the Grand Prix of the ICC Biennale 1997 in Tokyo, an Award of Distinction (1999) and several Honorary Mentions (1994, 1996, 2002) at Prix Ars Electronica in Linz, an exhibition at the Museum of Modern Art in New York (1994), an invitation by Nam June Paik to present at the Gwangju Biennale (1995), and participations in Wired’s NextFest in Chicago (2006) and New York City (2007). His work is part of major public and private collections in North America, Europe and Asia including the ZKM (Karlsruhe), the ICC (Tokyo), the National Gallery of Canada (Ottawa) and the Canadian Center for Architecture (Montreal). A graduate of the Nova Scotia College of Art and Design (1974) and of the Massachusetts Institute of Technology (1984), Courchesne was a student of Toni Mann, Michael Snow and Otto Piene. Luc Courchesne is a founding member of the Society for Art and Technology, honorary professor at Université de Montréal and member of the Royal Canadian Academy of Arts.

In November 2021 Luc Courchesne is artist in residence at the Museumsquartier in Vienna and exhibites one of his works in the Schauraum of the University of Applied Arts Vienna in the MQ21 Museumsquartier Vienna.