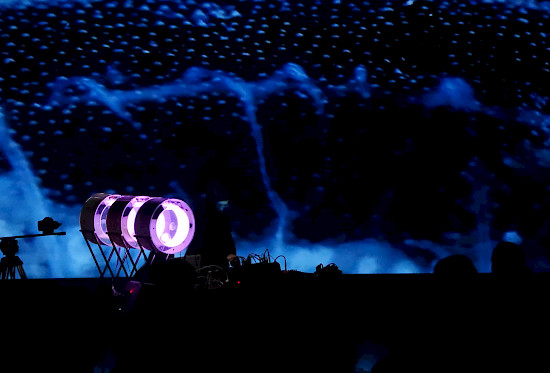 Robertina Šebjanič will talk about her research-based artworks that deals with cultural, (bio)political and ecological realities of human imprint on aquatic environments and its consequences /challenges.

The project Aquatocene investigates the phenomenon of underwater noise pollution created by humankind in the seas and oceans. It encourages rethinking the human impact on the (under)water habitats. The Aurelia 1+Hz project is divided in two parts; the performance Aurelia 1+Hz / proto viva sonification looks into a new critical redefinition of social values and new attitude towards cohabitation of interspecies while the installation Aurelia 1+Hz / proto viva generator deals with the biopolicy of prolonging life.

Robertina Šebjanič (SI) based in Ljubljana/ is working in the cross field of art – technology – science. Her work deals with cultural, (bio)political and biological realities of aquatic environments. Her ideas and concepts are often realized in collaboration with others, through interdisciplinary and informal integration in her work. Her previous projects range between rethinking of future speculations of new trans-species (Humalga); animal-machine-human relationships, inter-species communication (series of works Aurelia 1+Hz); sonification of the chemical process (Time Displacement) and pointing out underwater noise pollution and its potential ecological consequences / challenges (Aquatocene). Robertina’s work encompasses audiovisual installations and noise/sound performances that tackle philosophical questions of our modern society unfolding her passion for understanding living systems and how they interact with the environment.