Selected productions of the Fulldome / VR & AR Lab of the DIGITAL ARTS Department tour to Salzburg between 13 October and 16 October 2022. They will be shown in the fulldome, which is part of the Lab's infrastructure and is being set up in Salzburg for this purpose.

The 360° screening takes place as part of the "Spot On MozART" cooperation project. "Spot On MozART" is an inter-university, interdisciplinary project devoted to visual research in how we listen, and thus to a (new) understanding of the music of Wolfgang Amadé Mozart in the 21st century (Lead: Universität Mozarteum Salzburg). 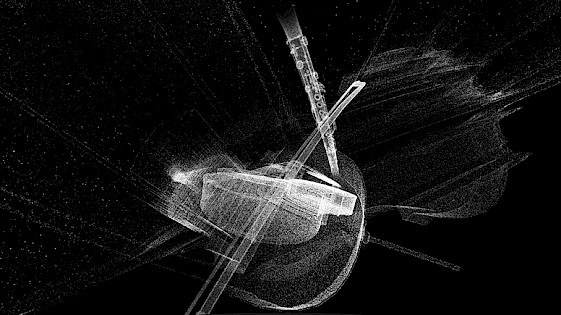 The interactive installation Mozart real-time Quintet has its premiere on Thursday, 13 October and Friday, 14 October as part of the programme Spot On MozART Expo. Mozart's clarinet quintet was realised here as an interactive fulldome environment. Visitors can intervene in and change the audiovisual composition with the help of a touch interface.

On Saturday, 15.10., and Sunday, 16.10., visitors to the Mozarteum are invited to select via tablet from a compilation of artistic works produced at the Fulldome / VR & AR Lab. Ten immersive projects by students, alumni and teachers of DIGITAL ARTS Department will be shown.

The Fulldome / VR & AR Lab at the DIGITAL ARTS Department is a platform for new creative processes with a focus on digital applications for fulldome, VR and AR environments. In an interdisciplinary exchange between students, teachers and researchers, experimental research projects are carried out that work on the development of new artistic grammars while questioning the influence of immersive technologies.

"Spot On MozART" is funded by the "Digital and Social Transformation" programme of the Federal Ministry of Education, Science and Research (BMBWF). Martin Kusch (Director Fulldome / VR & AR Lab) and Ruth Schnell (Head of the DIGITAL ARTS Department) are responsible for the project on the side of the University of Applied Arts Vienna, Elisabeth Gutjahr (Rector University Mozarteum) for the University Mozarteum Salzburg.