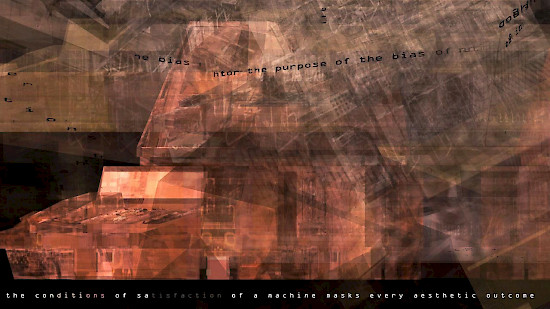 Bill Seaman will discuss a number of his interactive and generative works, as well as his new work which explores Recombinant Informatics — a new transdisciplinary database/search engine system. He will also play excerpts of his audio solo work, present video and discuss collaborations, as well as demonstrate one of his generative audio works.

Bill Seaman is a media artist and researcher — his work often investigates an expanded media-oriented poetics through various technological means— Recombinant Poetics. Such works often explore the combination and recombination of media elements and processes in interactive and generative works of art that become embodied via circular causal processes. Seaman enfolds poetic image/music/text relations in these works, often creating all of the media elements and articulating the operative media-processes involved. He is self-taught as a musician/composer. He has an ongoing interest in meaning production and has explored ideas around computational meta-meaning systems— systems that enable a user to become mindfully aware of how meaning is arising and changing through their interaction. He is deeply interested in new forms of computation, learning systems, the concept of creating an electrochemical computer, as well as the concept of Computational Creativity – both using the computer as a creative tool, as well as articulating the future of creative potentials as explored via “intelligent” computational devices – the creativity of creativity. More recently Seaman has been exploring notions surrounding Recombinant Informatics — a multi-perspective approach to inventive knowledge production. He has undertaken many different collaborations. He co-directs The Emergence Lab with John Supko, Media Arts + Sciences at Duke University where he teaches in the department of Art, Art History & Visual Studies.