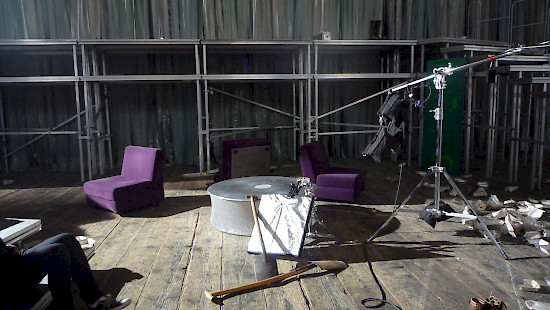 In her lecture, Constanze Ruhm will discuss her long term project series X CHARACTERS (2001 - 2013) with a focus on the notion of rehearsal in relation to her productions, as well as on concepts of referentiality and appropriation as strategy of a critical, feminist (time based) art practice.

Constanze Ruhm is an artist, filmmaker and author living between Vienna, Berlin and Paris. In 1996/97 she was Guest Professor for Visual Communication at HfG Offenbach/Main (Germany), between 2004 – 2006 Professor for Film and Video at Merz Academy Stuttgart (Germany). Since 2006 she is Professor for Art and Media at the Academy of Fine Arts Vienna (Austria). Between 2008 – 2011 she was Adjunct Professor at the Art Institute Boston at Lesley University (USA). Curatorial projects include Fate of Alien Modes, Secession 2003 as well as projects in the framework of haus.0 program at Künstlerhaus Stuttgart (with Fareed Armaly) between 2000 - 2003; her most recent curatorial works is Putting Rehearsals to the Test (with Sabeth Buchmann and Ilse Lafer), at MUMOK Cinema Vienna 2013; and at VOX Centre pour l'art contemporain / Leonard and Bina Ellen Gallery / SBC Gallery, Montréal, Canada (upcoming exhibition in fall of 2016). International exhibitions, film festivals, projects in public spaces, symposia and publications (Utopia of Sound, with Diedrich Diederichsen, Schleebrügge Editor Vienna 2008; Putting Rehearsals to the Test: Practices of Rehearsal in Fine Arts, Film, Theater, Theory and Politics, with Sabeth Buchmann and Ilse Lafer, Sternberg Press 2016). Her artistic practice focuses on the relation of cinema, new media and performative forms, and investigates issues of female identity and representation under a feminist perspective. Her productions emerge at the intersection of time- and archive-based installation works, film/video, web-based projects and publications. Since 2013 she also collaborates with French filmmaker Emilien Awada (Panoramis Paramount Paranormal, 2014-2015; AN(NA)/GRAM, (ongoing).