Necropolitics and Environmental Struggle is an examination of the implicit necropolitics found in various environmental strategies coming from different positions on the political spectrum. Mostly unacknowledged (except by the radical left), many environmental theorists and activists prefer to speak only about the improvement of sustainable forms of organizing life while ignoring the catastrophic consequences these forms will have on the organization and administration of death for humans. Environmentalism seems to be drifting into a staunch anti-humanism. In order to retrieve the movement(s) from this outcome, a new language that can speak to the organization of death in everyday life needs to be developed, followed by the creation of a holistic strategy that incorporates both necropolitics and biopolitics in a manner that can work for humans and ecosystems alike.

Steve Kurtz is a professor emeritus of art and a founding member of Critical Art Ensemble (CAE). CAE is an award-winning collective of artists of various specializations dedicated to exploring the intersections between art, technology, political activism, and critical theory. Always interested in new experiences and expanding their knowledge base for a better interdisciplinary capacity, CAE has been engaged with interventions and provocations in information and communication technologies, sex workers’ rights, the AIDS crisis, a variety of biotechnologies, ecological systems, utopian social arrangements, criminality and legal systems, the production of the real, and the structure of public space. In addition, CAE has written eight books on cultural resistance. 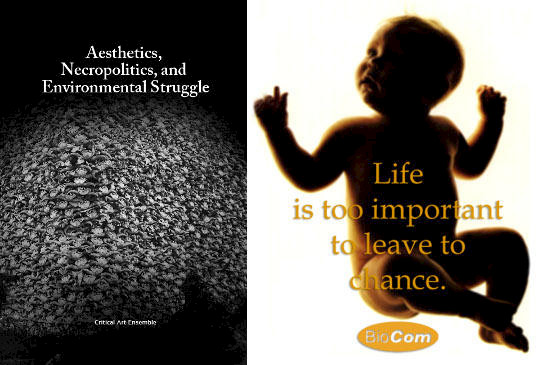