„Projects between the Body and the Virtual" 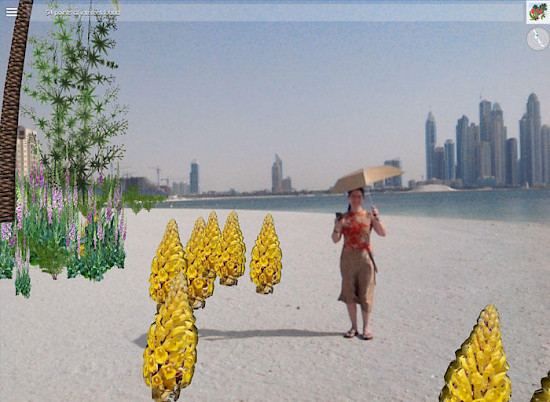 Tamiko Thiel will talk about her projects that cross between the body and the virtual in various ways:
"Biomer Skelters" (with Will Pappenheimer) - Participants become agents of climate change as they walk the city, their heartbeats generating trails of virtual wild growth in their wake."Goldsegen: wie viel brauchen Sie um glücklich zu sein?" ("Golden Blessings - how much do you need to be happy?") Participants reveal their desires in exchange for personalized lucky charms. "Fractured Visions" - virtual installations inspired by the visual disorder palinopsia cause The Shard in London to fragment and repeat. "I am Sound" (with Christoph Reiserer) - Digital Synesthesia, work in progress - the participant's face and voice transform and modulate a musical composition.

Short bio: Tamiko Thiel is a visual artist exploring the interplay of place, space, the body and cultural memory. Her first virtual reality work, Starbright World, was created for then Starbright Foundation chairman Steven Spielberg; her subsequent artworks in this genre won awards from WIRED Magazine and the IBM Innovation Award for Art and Technology. A founding member of artist group Manifest.AR, she participated in their pathbreaking guerrilla augmented reality (AR) intervention at MoMA NY in 2010, and was main curator and organizer of their AR intervention at the Venice Biennial in 2011, which lead to official participation in the 2011 Istanbul Biennale. Her work has been supported by institutions such as the MacDowell Colony, MIT CAVS, Berlin Capital City Cultural Fund (Hauptstadtkulturfonds), Japan Foundation, Goethe-Institut, Zero1 Biennial, Arts Council England and FACT Liverpool.


She is Visiting Artist in Experiential Documentary Studies at Duke University, and augmented reality artistic advisor for the CCCADI project “Mi Querido Barrio” in Spanish Harlem/NY, for which she helped win a Rockefeller Foundation Cultural Innovation Award. She has taught and lectured at Carnegie-Mellon, MIT Media Lab, Harvard, Bauhaus-Uni Weimar, the University of Southern California School of Cinema-Television, the School of Film and Television in Babelsberg and the Berlin Universität der Künste (UdK). In 2014 & 2015 she is Visiting Professor at the Nanyang Technological University in Singapore.