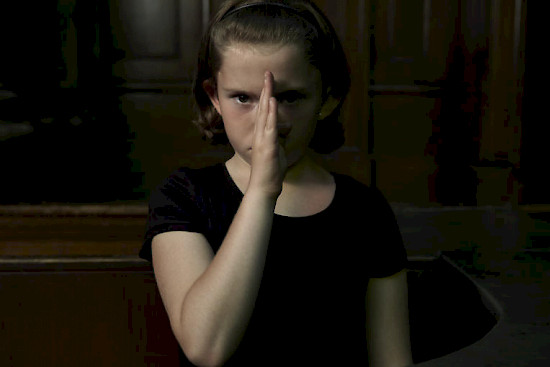 Danica Dakić is interested in the corporeal and political aspects of language and identity. In the video Emily different forms of language meet in a learning situation. We see a girl during a lesson in signing and hear the voice of her teacher alternating instructions and praise. We hear how the acousmatic instructions refine her spatial grammar and the phonology of the hands, and link facial expression to placement and movement. The image is a close-up, drawing our attention to the focus in her eyes upon the blind spot in our own partial position – between the sonic and the visual.

Emily was realized in Liverpool in collaboration with the “Liverpool Signing Choir” and the photographer Egbert Trogemann.

CV:
Born in Sarajevo in 1962. Danica Dakić’s practice extends from video and film to photography, installation and public art. Her work has been widely exhibited internationally. She has participated in many group exhibitions including documenta XII (2007), Istanbul Biennial (2003 and 2009), Sydney Biennial (2010), Liverpool Biennial (2010), and Arsenale/Kiev Biennial (2012). Her recent solo exhibitions include presentations at the Hammer Museum, Los Angeles (2011); Museum of Contemporary Art, Zagreb (2010); Generali Foundation, Vienna (2010), and Kunsthalle Düsseldorf (2009).