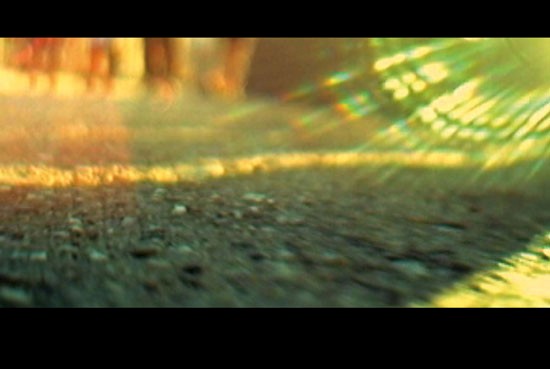 Friedrich Zorn’s media installation “walk on” lends a video art highlight to the series of exhibitions at the University of Applied Arts Vienna showrooms in the “Quartier 21”. Zorn presents his subjective and sensitive experiences as a blind pedestrian in a film translation, which through editing and montage is concretised in an independent form of cinematic statement.

“walk on” shows how Friedrich Zorn prepares his walks and how he wanders through streets that are more or less known to him, literally sightless and armed only with a stick. Up to five hidden cameras are concealed on his body, at the bottom end of his stick, on the tips of his shoes and hands. Media technology instruments are employed as a perceptive organ and thus become an active part of the filmmaker. The stick serves as an exploratory, forward mounted eye, the activity of which is accentuated by the macro-range acuity of the images provided by the camera that it hides.

In the finished video, the images rhythmically determined by various bodily movements, run in synchronised fashion and are accompanied by ambient sounds. The resulting perception, which is reduced to the rhythmic, the tactile and the acoustic, creates a specific world of sensation that Friedrich Zorn translates into the medium of film and visualises in a filmic realisation of great presence.

The artistic intention is ambivalent. On one level, the work concerns an exploration of the sensory experience of a blind person as an energetic icon within current, reactive surroundings in various locations, as juxtaposed in the “Angewandte” showroom on three screens. For in the current installation, Zorn’s artistic performances in Europe (Vienna), the USA (Los Angeles) and Asia (Hong Kong) confront one another as three independent and subtly diverging works. However, at the same time they combine to form a series, which will be continued with other performances at various venues. Thus, on a second level, the presentation is to be understood as an installation in progress, although conversely, Friedrich Zorn seeks to directly involve the viewer and suggest an expanded, field of meaning, which can be sensorily perceived, by means of a newly discovered cinematic grammar and architecture.