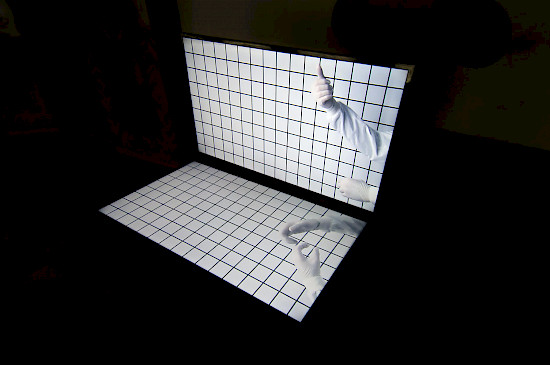 In the work “hands on (vers. 3) 2014”, the viewer is brought into a space reminiscent of a laboratory. The black and white grid that serves as a background on both channels is a reference to the classical frames of chronophotography and to the tiles typically seen in the laboratory for molecular medicine. This space becomes the scene of the action, action that is limited to the shadow-like movements of two hands. As if on a stage, the hands become the sole actors, garbed in tightfitting protective gloves and the sleeves of the obligatory white lab smock.
The minimized visual arrangement totally focuses the viewer´s attention on what is implicitly known by the person whose hands are in motion and present, somehow, in the gestures of these hands. The hands in motion were filmed in the studio by two cameras and can thus be viewed both frontally and in high-angle shot at the same time on two video screens, one mounted horizontally and the other vertically. In this way, the installation follows filming procedures that are used for laboratory test set-ups and that serve to produce so-called utility films for the purposes of research in the natural sciences.

Biography:
Herwig Turk lives and works in Vienna and Lisbon.
His projects probe the interconnectivity of the fields of art, technology and science. From 2010 to 2013, he has been artist in residence at the Instituto da Medicina Molecular (IMM), Lisbon.
From 2003 to 2009, Turk worked together with Paulo Pereira, head of the Department of Ophthalmology at IBILI (Institute for Biomedical Imaging and Life Sciences) at the University of Coimbra.
In recent years, his work has been shown at venues such as the Museum of Applied Arts, Vienna, the
Seoul Museum of Art, the Neues Museum Weserburg in Bremen, the Media Art Laboratory TESLA, the Galerie Georg Kargl in Vienna and the Transmediale in Berlin, to name but a view. Herwig Turk is currently working on a monographic exhibition for the Carinthian Museum of Modern Art (MMKK).