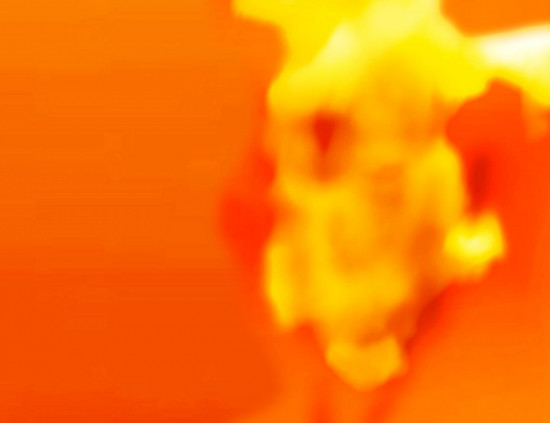 Spectre builds on a portfolio of data driven work and ‘nano’ art developed by the artist and collaborators. These projects explore the ubiquity of data streamed from an instrumentalised world and its potential as a material for manifesting things that lie outside of the normal frames of reference - things so far away, so close, so massive, so small and so ad infinitum.

Spectre suggests that the memories of the Schauraum are bonded to its fabric by the atomic forces that have now been unlocked by the Atomic Force Microscope. Spectre is drawing on the experiences of Professor Gustav Adolf Schwaiger, the Technical Director of the Austrian Broadcast Corporation, and his collaboration with famous medium Rudi Schneider in the late 1930’s to the early 1940’s. “G.A. Schwaiger… conducted some private (and rather obscure) experiments with the famous medium Rudi Schneider in the studio of a female painter... In fact the flat could have been right above our exhibition space (Schauraum).”1 (Fiel, W. 2011).

According to Mulacz’s History of Parapsychology in Austria, “Schwaiger in his research focussed on investigating that ‘substance’ and its effects applied then state-of-the-art apparatus, such as remote observation by a TV set.”2 (Mulacz, P. 2000). That ‘substance’ was the ectoplasm that would emerge from Schneider mouth during their experiments. Spectre extends these experiments by broadcasting live feeds from the space of the Schauraum and simultaneously replaying the physical remnants of these happenings as captured in the atomic forces binding the dust from the their laboratory.

The spectres of Schwaiger and Schneider or the ectoplasm they conjured up are manifest through the Spectre installation.

Mike Phillips is Professor of Interdisciplinary Arts at the University of Plymouth. R&D orbits digital architectures and transmedia publishing, and is manifest in a series of ‘Operating Systems’ to dynamically manifest ‘data’ as experience in order to enhance perspectives on a complex world. The Operating Systems project explores data as an abstract and invisible material that generates a dynamic mirror image of our biological, ecological and social activities.

Mike Phillips is director of i-DAT.org, an Arts Research Organisation that acts as a catalyst for creative innovation across the fields of Art, Science and Technology, facilitating regional, national and international collaborations and cultural projects. As a networked organisation and ‘cultural broker’ i-DAT’s transdisciplinary agenda fosters ‘open innovation’ and knowledge exchange between companies, institutions, communities and individuals. i-DAT is developing new ‘tools’ for production, dissemination and participation that challenge traditional models of creation and consumption, and embrace the shifting relationships between audiences and cultural producers. i-DAT’s projects can be found on the i-DAT web site at: www.i-dat.org.