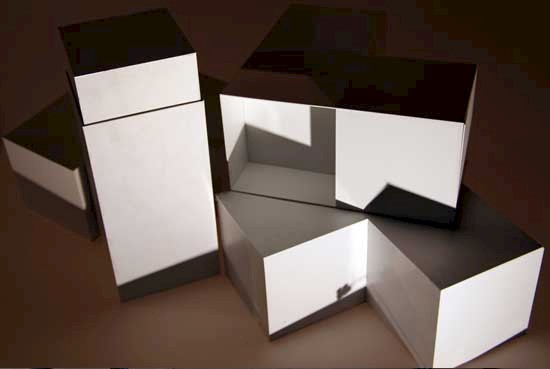 The title "QUANTITY" derives from the simple fact that it is an
installation containing a collection of objects that through their
shape, have the ability to expand and contract. The objects are
designed so that the continuous expansions and contractions are
"clumsy" and strenuous attempts to express movement. Over time and the
limited space of the staging results in forced collision of artifacts
to each other and the surrounding walls. As a result of which the
geometrical forms either change the direction of their movement
patterns or develop a common collective locomotion.

The diversity of interactions and collective forms that fascinate
evolve over time, before the eyes of the observer, completely without
his intervention, becoming socialized.

But what does it mean if it is possible for an artist to inscribe the
social behavior of biological forms "hijack-ing architectural bodies?
For Passath it's just one more proof of the many possibilities of
techno-organic being.