The walls have ears and a hammer to pierce holes for their eyes to see.

Autonomous robots embedded into the walls of a gallery punch holes to inspect what’s outside, signal each other, and conspire. The structural interventions of this surveillance mark and wound our environment and leave behind open scars.


Part I.
The installation Zwischenräume embeds a group of autonomous robots into the walls of the Showroom Angewandte. They punch holes through the walls to inspect what’s outside, signal each other, and conspire. As if the walls had ears and a hammer to pierce holes for their eyes to see. The work develops a political relationship between the stealthy invasion of digital surveillance and urban combat tactics in which soldiers are literally instructed to walk through private walls.

The installation manifests this relationship in an autonomous sculptural process that marks and wounds our environment, leaving behind open scars. Yet the scenario also unfolds its own irony—compelled to survey all that’s happening outside the robots continue to punch holes until they eventually un-wall the wall and thus unveil themselves. Combat tactics meets Gordon Matta-Clark.

Part II.
At the end of June the robots and the surveillance machinery have been removed. The traces of their intervention remain manifest. In addition, a video documentary shows the transformation of the wall and the audience interactions during the past three weeks. 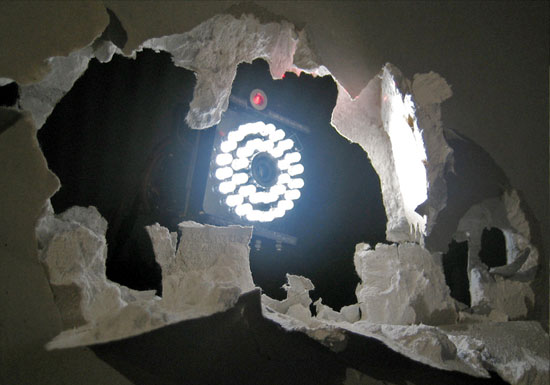