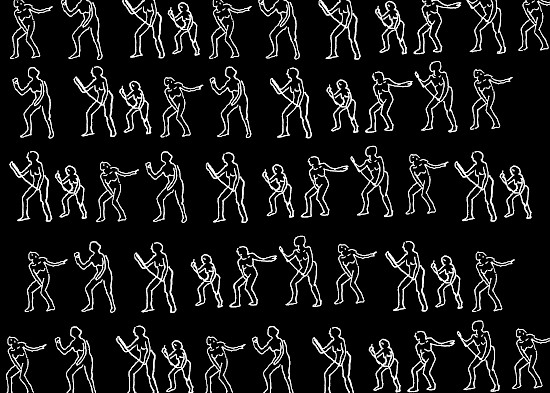 The installation Looped Scroll relates to the performance Interior Scroll by Carolee Schneemann from 1975. The Zoetrope shows a particular part of it. The sound for the installation is taken from a conversation Carolee Schneemann and Stefanie Wuschitz held in September 2010. Although 1939 Pennsylvania born media artist Carolee Schneemann produced this work thirty-seven years ago, today, young Austrian female media artists seem to be confronted with similar conditions. The animation replicates the radical gesture of her generation in a model like trivialized form. With the persistence of a prayer wheel, her gesture will repeat itself until it ceases to be needed.

Conversation between Schneemann and Wuschitz (excerpt):

Schneemann: (…) So these were the years we call “Separatism.” Where women had consciousness raised and started their own galleries and their own publishing. They still had partners and families, but we had all this analysis, it was tremendous! So for me it starts when I'm still in college with De Beauvoir, it's a revelation and it explains...explains everything. It explains why my boyfriends stole my paint brushes. (…)

Schneemann: Yeah. Ok, first of all: Every human being is conceived through an orgasm. They do not come from a chicken and an egg. Every woman has particular orgasmic capacity. So they are different in terms of structure then those of a man. Interesting enough, gender transformations undermine the basic two elements of being female and male. So many people are changing gender, to what is more authentic, psychologically for them, others want to experiment and deconstruct what they think is a set of narrow conventions. That's all part of breaking down so many predictive constraints and repressions. So of course the church is against it, the military is against it. And once you see who your enemies are or where the resistance is, then you can get more certitude, can be more sure. (laughing) (...)

Wuschitz: So have you been observing a decline of these big institutions or do you observe an actually strengthening of these big apparatuses? Like nation state, army, church, religion. Do you think they have more power in our society, more influence than before?

Schneemann: Yes. But it's hidden, it's included, it's extremely sinister. It's multi co-operation across cultural boundaries. The citizenship has no idea whatsoever of where the dynamics lie in terms of militarism, technology and plans to control ecologies. Here we don't have any idea. Not normally. And it's quite complex and the research is like Future Shock, it's like every kind of paranoid fantasy that anyone might have had, all of which are probably under way now. What do you think?

Wuschitz: I just think that there is that movement of open source technology that gives access to code and programs and software and knowledge for free now over the internet. So I have the slight hope that through individuals being able to create things without having this “Bell Labs” or other companies in between, maybe more people can have a voice and have a chance to develop structures, develop technologies, develop...

Schneemann: The thing is the voice is so…dispersed. Cause having been through the 60s, where we had a coherent movement, it was really coherent and it was everywhere, and it was very stylized in a way. People would just see each other and recognize by their hair, by their ear ring that they were radical and that they were against the Vietnam War. At the same time that was a very brief period of radical independence in which huge communities across the nations shared directions and intention. And then systematically in our countries all our leaders were assassinated: Our popular culture figures, our black figures, our president and vice president, Martin Luther King. Everybody went down. And it was never discussed as part of a structure. It seemed like it was all strange round of mistakes and arbitrary events. Even though analysis has given the underlying force field it's so suppressed, most people don't have a chance to think about it and they don't want to, it's much too frightening. (...)

Stefanie Wuschitz is a researcher, lecturer, and artist based in Vienna. After graduating with honors from the University of Applied Arts Vienna, she completed her Masters at New York University’s ITP program in 2008 and went on to spend a year at HUMlab in Sweden, where she worked as a Digital Art Fellow, organizing the Eclectic Tech Carnival 2009. Wuschitz founded the feminist hackerspace Miss Baltazar’s Laboratory, a network for women artists, who share their knowledge and open source skills in a series of workshop sessions. Her work was exhibited internationally and Miss Baltazar‘s Laboratory was invited to several festivals and conferences around the world, among others at Harvestworks NYC (2010), Ars Electronica (2010), Transmediale (2011), Taipei Artist Village (2011), Coded Cultures (2011), TEDx (2011), Platform 4 (2011), and Frankfurter Kunstverein (2012).