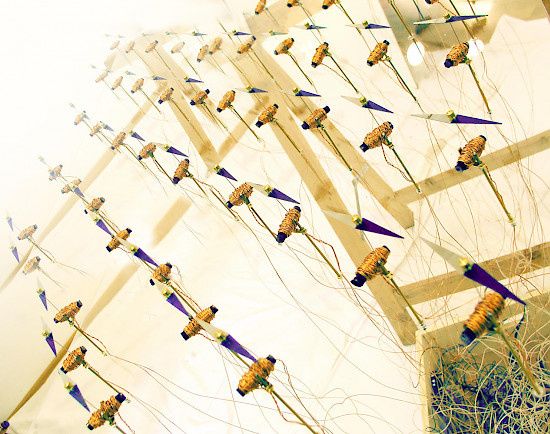 A field of magnetic needles is set in motion by sound frequencies emanating from electrical spools. If all is quiet, the needles turn to their rest position facing north. At the same time the magnetic needle matrix also becomes an instrument, as its rhythmical relay noises transform the input sound into percussive patterns. The Schauraum exhibition space is turned into an electromagnetic sound-space, in which the laws of sound seem to override the laws of physics. The exhibition will be opened with a music performance that activates the installation. The live music event leaves behind the recurring patterns of the moving needles.

Biografie: Ulla Rauter, born 1980 in Vienna Neustadt, studied Transmedia Art with Brigitte Kowanz at the University of Applied Arts Vienna. In 2008, Rauter received a promotion prize in the first Ö1 talent scholarship round, in 2009 a working scholarship from the Austrian Federal Ministry for Science and Research, and in 2011 a start-up scholarship from the Austrian Federal Ministry for Education, the Arts and Culture. In 2010 she and Christine Schörkhuber founded the annual sound-art show Sound Manifestos. Ulla Rauter works at the interface between sound and fine art.